About Us General Legal

Is It Financially Feasible to Become a Lawyer?

Being an advocate in the law—a lawyer—is a time-honored and noble profession preceded by giants like Abraham Lincoln, Francis Bacon, Thomas More, Alexander Hamilton, and Ben Stein. Nowadays, to become a lawyer, most states require (1) graduation from an accredited law school, (2) passage of the state-administered bar exam, and (3) proof of good moral character. But the prerequisites for a license to practice law were not always so uniform or demanding.

Abraham Lincoln, for example, was granted a license to practice law—despite only having had less than a year of formal schooling—upon a showing to the Illinois Supreme Court that he had good moral character.

Because law school is now almost always a prerequisite to getting licensed to practice the law, the decision to become a lawyer cannot be seriously considered without weighing the financial ramifications of attending—and therefore paying for—law school. That must be analyzed in light of current lawyer salaries and the opportunities in the job market.

Much has been said since the latest economic downturn about whether going to law school is a good investment. Now that the economy is improving, there is disagreement about whether three years of training and tuition is time and money well spent in exchange for the license that will allow you to earn an attorney’s wages.

Some believe that given the recent decrease in enrollment, coupled with the increase in jobs in the market, now is a great time to begin law school. Others are critical of this position, pointing to the fact that we now have a few years’ worth of graduates who still can’t find a job who are operating to saturate the market and keep wages low even amidst the recent economic upturn.

It’s hard to predict what the job market will be like in three years, what wages will look like for a first-year associate, and how much demand there will be for new attorneys. So without the benefit of a crystal ball, if you’re considering applying to law school, consider the following, which we do know, now: 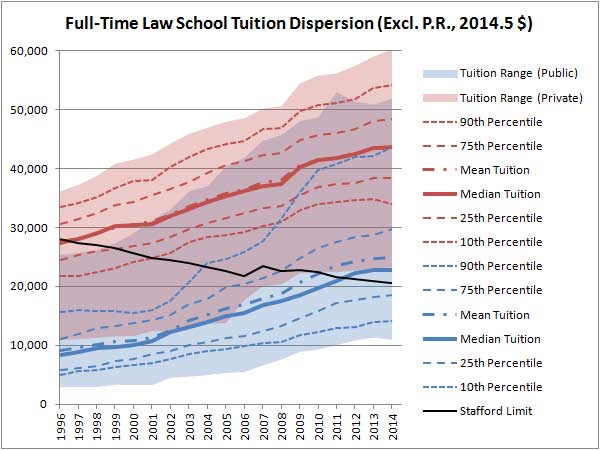 And remember, tuition is only part of the cost of law school. You have to pay for books, housing, food, internet, etc. So unless you have a full-time working spouse or parents willing to foot the bill, know that you’ll graduate with student loans that resemble a mortgage—except that they’re almost never dischargeable in bankruptcy.

NALP, the National Association for Law Placement, has been tracking attorney salaries for twenty years. They track salaries based on law firm size, ranging from small firms (2–10 attorneys) to large firms (more than 250 attorneys). In 1995, the median income for first-year associates at small firms was $45,000. At large firm, it was $70,000. In the last twenty years, those figures have increased to $68,000 and $135,000, respectively.

No one can say for sure whether attorney entry-level salaries will rebound, resume to a slow climb, or continue to significantly lag or decrease.

No one starts law school planning to fail. But consider these sobering facts:

According to lawinfo.com, nationwide, about 20–40% of law school students drop out after their first year. Of those who do make it through law school, according to the New York Times, 67% of the class of 2013 (nationwide) secured full-time jobs within nine months of graduating, and the class of 2014 fared a little bit better at 71%. The bar exam—a pre-requisite to becoming a lawyer—further culls potential attorney candidates. In Nevada, for example, ranked by at least one metric as the fifth-hardest bar exam in the nation, only 72.86% of test-takers pass. Granted, unlike law school, you can retake the bar, but only if you wait six months (without an attorney salary) and fork out another several hundred dollars to do so.

Mathematically, then, using the figures above, only approximately 15.5% of all those who start law school with the intent of practicing in Nevada end up finishing law school, finding a full-time job within nine months, and passing the bar exam the first time. Those who do will likely have paid record-high tuition rates and entered a job market with behind-the-curve salaries.

Although these figures are not for the light-hearted, it is not all doom and gloom. Law is a rewarding career. It is empowering, allows for many opportunities to do good—helping others where they cannot help themselves—and can be quite lucrative.

If you’re thinking about going to law school, do so with eyes wide open. It’s not for everyone. For some of us it is a very rewarding path. For some of us, it is the only path. It’s not easy, but for those who like to overcome the odds and are able to do so, it’s well worth it to become a lawyer.

Dec 30, 2018
What to Expect in Your Nevada Personal Injury Case During a Trial

While most personal injury lawsuits in Nevada and across the country are generally settled before the parties see the inside of a courtroom, a small percentage of these disputes end up in a full blown trial.

It is important not only to understand what insider trading is and how to make sure you are not engaging in it, but also to be aware of the reasons why it is illegal.

Jul 15, 2018
Go to Trial or Settle the Case? Pros and Cons for Nevada Personal Injury Victims

While the majority of the public’s concept of a lawsuit is the climax of a jury trial, many cases, including Nevada personal injury cases, never see the inside of a courtroom.

Jun 19, 2018
The Nevada Pregnant Workers Fairness Act: What Changed and Why it Matters

Jun 1, 2018
Accessing Nevada Public Court Records: How do I Find My Case Online?

Nevada’s Constitution states that judicial power shall be vested in a court system composed of a supreme court, district courts, and justices of the peace.

May 27, 2018
When can Doctors Refuse to Release Your Medical Records?

Under the federal Health Information Portability & Accountability Act (HIPPA), patients have a right to obtain copies of medical records from any healthcare provider.

Below are some weird laws that are still on Nevada’s books today.

Who Can Sue for Wrongful Death?

Responsibilities After an Accident