How Far Above and Below the Ground Do My Property Rights Extend?

You’re a new homeowner. You wear yourself out initialing multiple times per page on the never-ending sale agreement then proudly sign at the end and accept the keys to your new house. You’ve just gone into the biggest debt of your life, but couldn’t be more thrilled.

It was probably explained to you during the process that you now have certain legal obligations. You have to pay property taxes, and perhaps property mortgage insurance or homeowners’ association dues. But what rights come with those duties? What is it that you really own?

You know you own the house and the land it sits on, within certain boundaries identified in your deed. But how far down into the ground do your ownership rights extend? And how far high into the sky? It’s actually a complicated question without a complete answer (mostly because there isn’t too much fighting going on about how the space a couple hundred feet above your house is used).

Anciently (dating back to the 13th century in Italy), the purchase of land could be described by a Latin maxim, cuius est solum, eius est usque ad coelum et ad inferos, which means, “whoever’s is the soil, it is theirs all the way to heaven and all the way to hell.” (This presumes that hell is within the earth, and heaven above it, neither of which have been conclusively proven.) The United States Supreme Court interpreted that to mean that land ownership extended in its upper bounds to “the periphery of the universe.”

In geological, and more-practical terms, that meant you owned everything to the inner core of the earth below your property to the end of the atmosphere, or exosphere, above your property. 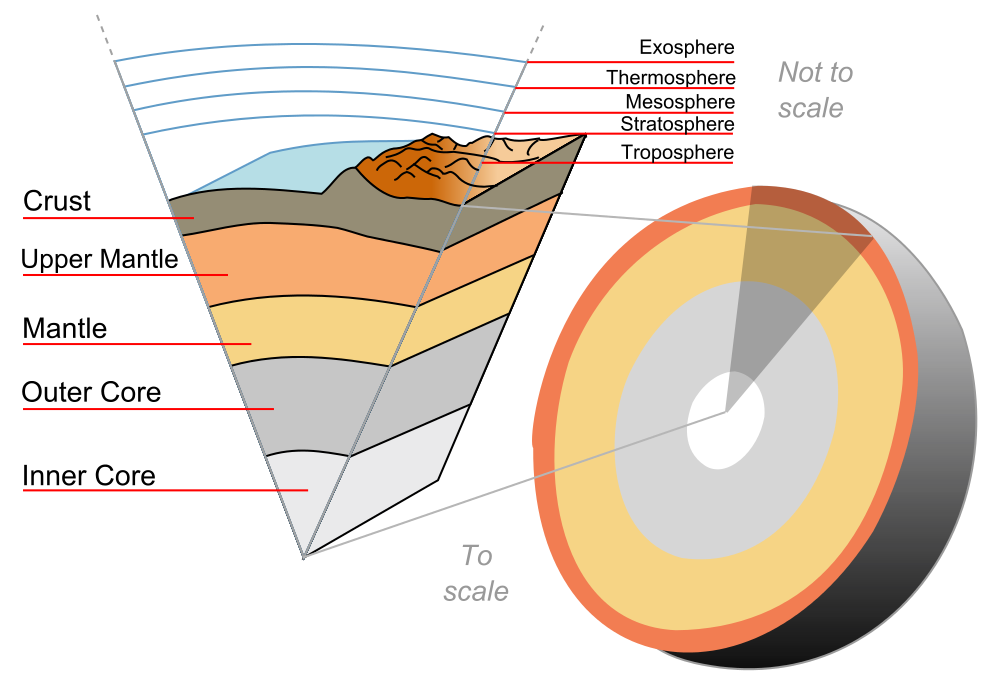 However, with public needs like air travel, it became impractical to allow landowners the rights to exclude use of their own land so far above or below the segment they were actually using.

The question remains, how much of the space above and below your property do you actually own?

As clean as we would like the answer to be, it is unfortunately not that simple. In 1946, the United States Supreme Court did provide some guidance, though, in a singular case between a chicken farmer and the United States Government.[1. United States v. Causby Et Ux., 328 U.S. 256 (1946).]

The army and navy regularly conducted flights over the chicken farm at an altitude of approximately 83 feet. The noise from these flights confused the chickens, which would fly into the walls and kills themselves—as many as six to ten in one day for a total chicken death toll of 150.

The court considered the ad coelum doctrine and concluded that it “has no place in the modern world,” recognizing that “[t]he air is a public highway.” Nevertheless,

it is obvious that if the landowner is to have full enjoyment of the land, he must have exclusive control of the immediate reaches of the enveloping atmosphere. Otherwise buildings could not be erected, trees could not be planted, and even fences could not be run. The principle is recognized when the law gives a remedy in case overhanging structures are erected on adjoining land. The landowner owns at least as much of the space above the ground as he can occupy or use in connection with the land. The fact that he does not occupy it in a physical sense — by the erection of buildings and the like — is not material.

The court concluded that though a landowner did not own all the land above the property, their rights did extend far enough up that they could still enjoy their property. From that case, we know that the above-surface altitude at which property rights end is somewhere above 83 feet.

The upper limit, based on the Federal Aviation Administration’s definition of navigable airspace (meaning everything above it is free for pilots to fly), is 500 feet.

As of yet, there are no laws on record that establish who owns the land between 83 feet and 500 feet. However, the FAA has already made proposals for new regulations that would allow commercial drone operators to fly drones at altitudes below 500 feet. These regulations are far from final, so the details are sparse as to what their proposal would be for minimum altitude of these flights. For now, you can confidently claim ownership of the land above your home up to 83 feet, and perhaps beyond, but not past 500 feet.

The most significant subsurface rights are mining rights. If you’ve purchased a property that includes mining rights, then you still have rights to the core of the earth, though the deepest anyone has ever drilled is 7.62 miles, which is not even close to getting through the crust, much less through the mantle to the core. And that was after 19 years of drilling.

If you are digging on your property and come across an indian burial site, Nevada law requires you to report it, and the Nevada Indian Commission then has certain rights with what is done with the burial ground. If you happen upon a burial site under your own property, and you fail to report it, or you willfully remove, deface, injure, or destroy the grave, you’ve committed a gross misdemeanor and open yourself to civil penalties as well. Being involved in a Nevada car accident is complicated enough if you are in your own car, but it can be even more frustrating if you are in a rental car. Not surprisingly, social media posts are often brought up in the courtroom when a case is being litigated and tried in front of a judge and/or jury. May 29, 2018
What do Recent Changes to Federal Sports Betting Laws Mean for Las Vegas?

Many have worried about how the recent Supreme Court of the United States’ (SCOTUS) decision on legalizing sports betting will affect Nevada and specifically the city of Las Vegas. A moving violation is a breach of a traffic law which happens while the accused driver’s vehicle is in motion. Being a pedestrian in this country has become increasingly risky over the past several years, and Nevada’s cities are no exception to this trend. Typically, a life sentence is a prison term that lasts for the accused’s entire lifetime. Nov 7, 2017
Is it Legal to be Registered to Vote in Multiple States?

In short, voting in the same election twice is a crime, but being registered in two places in not.

What Lawyers Are Thankful for